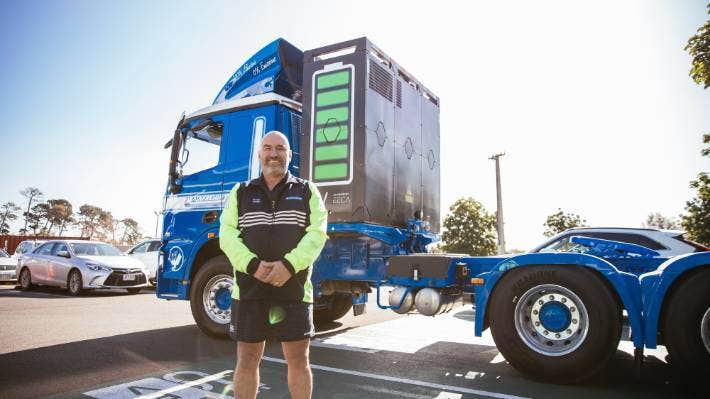 Mainfreight’s newest truck runs on electricity – and rather than waiting a long time to charge up, the truck swaps an empty battery for a fully charged alternative.

Within six minutes, an e-truck can go from empty to full, thanks to battery-swapping technology.

Unlike personal cars that spend most of their lives idle, freight-carrying trucks need to be on the road and earning their keep as much as possible. So while electricity is a lower-carbon and cheaper fuel, intercity truckers don’t have time to wait for their vehicles to power up.

Enter the battery-swapping E700, imported from China by Auckland firm Etrucks. Five are currently on our roads putting the tech through its paces.

Supply company Mainfreight is operating an e-truck between Auckland and Hamilton, with the battery swap taking place at each end of the run.

At 40 tonnes, the truck and cargo has a range of about 130km on a full battery, said Etrucks director Ross Linton.

As well as providing a quick top up, the swapping system also means the batteries on the truck can be smaller, Linton said. A lighter truck can carry more freight.

The six-minute swap is actually shorter than it would take to fill a truck with diesel, Linton said.

“But you have to do it more often. So it’s still going to take longer to swap batteries out for the same range,” he added. “We’re still slower than diesel, but not by much.”

After the price of diesel rose in response to the Russian invasion of Ukraine, electric trucks are becoming more economically attractive, Linton said. Like electric cars, e-trucks have a higher upfront purchase price but lower running costs.

Most of that extra cost is the battery, he said. Etrucks aims to balance that out by opening a battery rental station in South Auckland next year.

“It’s much the same as the LPG cylinder for your BBQ. You’ll buy the truck without the battery, go up to the station and they’ll swap a battery onto your truck and away you go,” Linton said. “You’ll get a battery with electricity and bring it back when it’s depleted.”

Natural gas and LPG are fossil fuels. Homes using these for heating and cooking have a higher carbon footprint than ones using electricity. When an appliance needs replacing, consider purchasing an electric heat pump or induction cooktop. As a bonus: these technologies are more efficient and therefore cheaper to run than fossil-fueled versions.

However, Linton doesn’t see the battery-swapping concept catching on for smaller vehicles. “The ranges you’re getting with EVs now make it unnecessary. In New Zealand, most people have a garage or off-street parking, so they can charge at home.”

Trucking companies are also testing out vehicles powered by green hydrogen, made from renewable electricity and water.

With battery technology improving every day, Linton believes electricity is able to power much of the freight within cities and between nearby regions. Eventually, he envisions a truck could go right through from Auckland to Wellington stopping to swap batteries “once, maybe twice”.

And electricity has a head start, as it’s already generated in large quantities with a national distribution system.

You can help the climate crisis

Articles and investigations that put pressure on Governments, corporates and communities regarding their climate response create real change.

The Government shaved 6 million tonnes off the first-ever carbon budgets after Stuff’s climate desk uncovered an error. That’s about the pollution emitted by the Huntly power plant over two years.

By supporting Stuff, you’re helping us drive important change to save our planet. Make a contribution today.