Solar + Storage Hybrid plants are poised for explosive growth in the U.S.A

At the beginning of 2021 the U.S. had 73 solar and 16 wind hybrid projects, amounting to 2.5GW of generation and 0.45GW of storage. By the end of 2021, over a third of the 675GW of solar in the grid connection queue were hybrids, and 19GW were wind hybrids. Only one in four typically get approved, built and connected. But that still points at a twenty-five-fold increase in hybrid generation. It’s why Joachim Seel, Ben Paulos and Will Gorman at the Lawrence Berkeley National Laboratory are predicting a hybrid explosion that will dominate this decade like pure solar and wind dominated the last. In states like California where solar already exceeds 25% of annual power generation, 95% of queued solar projects come with batteries. The authors highlight the main drivers: lithium batteries are getting cheaper, and the problem of solar and wind intermittency can be solved with storage. They summarise the policy questions that are raised by this revolution. For example, federal tax credits incentivise renewables-storage co-location when they instead should now be incentivising grid de-congestion. And power market rules need to evolve as the grid gets more complicated: in this instance, hybrids can also be either sellers or buyers of power, or both. Whatever the rules, grid optimisation should be the ultimate goal.

America’s electric power system is undergoing radical change as it transitions from fossil fuels to renewable energy. While the first decade of the 2000s saw huge growth in natural gas generation, and the 2010s were the decade of wind and solar, early signs suggest the innovation of the 2020s may be a boom in “hybrid” power plants.

A typical hybrid power plant combines electricity generation with battery storage at the same location. That often means a solar or wind farm paired with large-scale batteries. Working together, solar panels and battery storage can generate renewable power when solar energy is at its peak during the day and then release it as needed after the sun goes down.

A look at the power and storage projects in the development pipeline offers a glimpse of hybrid power’s future.

Our team at Lawrence Berkeley National Laboratory found that a staggering 1,400 gigawatts of proposed generation and storage projects have applied to connect to the grid – more than all existing U.S. power plants combined. The largest group is now solar projects, and over a third of those projects involve hybrid solar plus battery storage.

While these power plants of the future offer many benefits, they also raise questions about how the electric grid should best be operated.

As wind and solar grow, they are starting to have big impacts on the grid.

Solar power already exceeds 25% of annual power generation in California and is spreading rapidly in other states such as Texas, Florida and Georgia. The “wind belt” states, from the Dakotas to Texas, have seen massive deployment of wind turbines, with Iowa now getting a majority of its power from the wind.

This high percentage of renewable power raises a question: How do we integrate renewable sources that produce large but varying amounts of power throughout the day?

That’s where storage comes in. Lithium-ion battery prices have rapidly fallen as production has scaled up for the electric vehicle market in recent years. While there are concerns about future supply chain challenges, battery design is also likely to evolve.

The combination of solar and batteries allows hybrid plant operators to provide power through the most valuable hours when demand is strongest, such as summer afternoons and evenings when air conditioners are running on high. Batteries also help smooth out production from wind and solar power, store excess power that would otherwise be curtailed, and reduce congestion on the grid.

At the end of 2020, there were 73 solar and 16 wind hybrid projects operating in the U.S., amounting to 2.5 gigawatts of generation and 0.45 gigawatts of storage.

Today, solar and hybrids dominate the development pipeline. By the end of 2021, more than 675 gigawatts of proposed solar plants had applied for grid connection approval, with over a third of them paired with storage. Another 247 gigawatts of wind farms were in line, with 19 gigawatts, or about 8% of those, as hybrids. 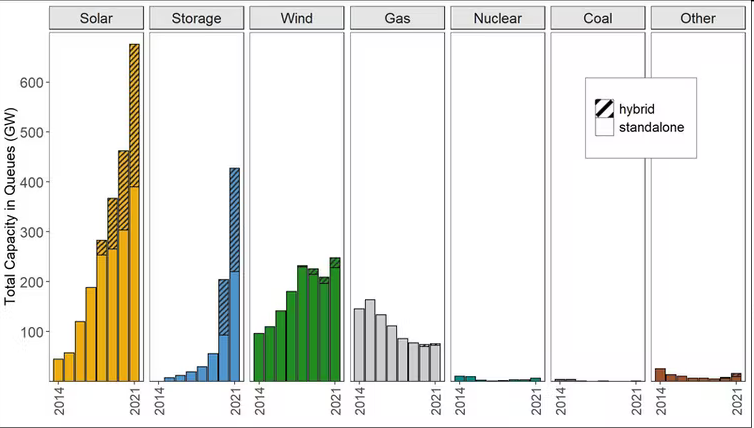 The amount of proposed solar, storage and wind power waiting to hook up to the grid has grown dramatically in recent years, while coal, gas and nuclear have faded / IMAGE: Lawrence Berkeley National Laboratory

Of course, applying for a connection is only one step in developing a power plant. A developer also needs land and community agreements, a sales contract, financing and permits. Only about one in four new plants proposed between 2010 and 2016 made it to commercial operation. But the depth of interest in hybrid plants portends strong growth.

In markets like California, batteries are essentially obligatory for new solar developers. Since solar often accounts for the majority of power in the daytime market, building more adds little value. Currently 95% of all proposed large-scale solar capacity in the California queue comes with batteries.

5 lessons on hybrids and questions for the future

The opportunity for growth in renewable hybrids is clearly large, but it raises some questions that our group at Berkeley Lab has been investigating.

Here are some of our top findings:

Hybrids are just beginning, but a lot more are on the way. More research is needed on the technologies, market designs and regulations to ensure the grid and grid pricing evolve with them.

While questions remain, it’s clear that hybrids are redefining power plants. And they may remake the U.S. power system in the process.

This article is republished from The Conversation under a Creative Commons license. Read the original article.