Why hydrogen is the most promising zero-emission technology 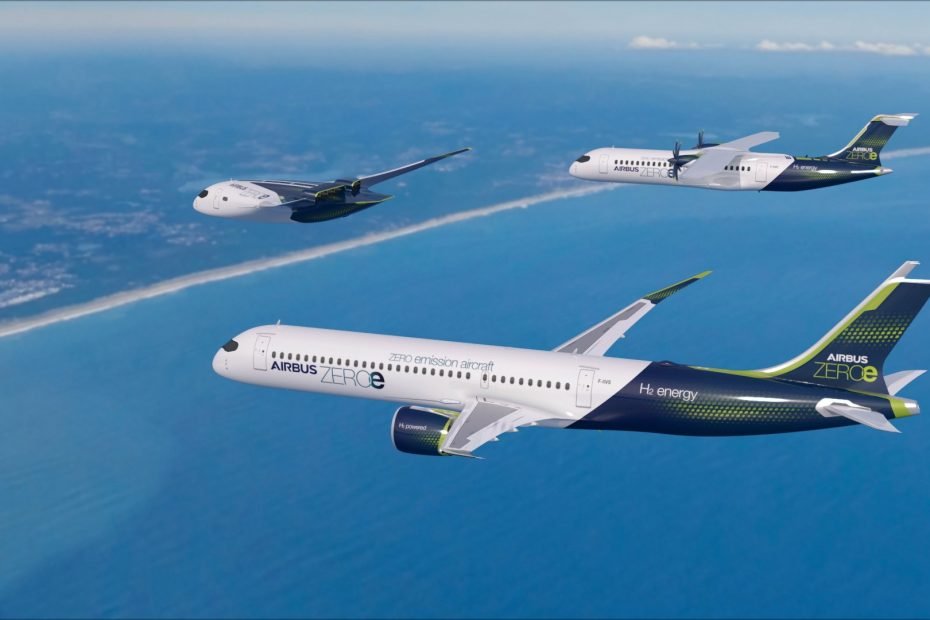 It is the clean energy carrier that is making the transport industry—from automotive and rail to shipping—sit up and take notice: hydrogen. For Airbus VP of Zero-Emission Aircraft Glenn Llewellyn, hydrogen is more than just an industry buzzword: it is potentially the future of aviation.

For over 50 years, kerosene has been king in the aviation industry, providing the essential fuel needed to power aircraft. But another high-potential technology pathway is now moving into the spotlight.

Hydrogen, the element at the very top of the periodic table, has been piquing the interest of aeronautical engineers worldwide. Glenn Llewellyn counts himself among hydrogen’s earliest fans. Today, he is at the helm of a hydrogen revolution at Airbus with the mission to unite all the ingredients needed to launch the world’s first zero-emission commercial aircraft programme.

At Airbus, we strongly believe renewable energy needs to power future aviation. And hydrogen is potentially the best pathway through which to do so.

Q. As recently as a year ago, the aviation industry was abuzz about battery storage’s potential. What happened?

For the past ten years, Airbus has been investing in electric flight research and development. We’ve learned a lot and are proud to have put many electric aircraft into the air. The focus of our electric flight programme has been zero emissions, which we successfully achieved for our one- to four-seat aircraft demonstrators. We still believe electric and hybrid-electric flight has a lot to offer. However, larger aircraft require a very high energy-per-unit mass, and battery technology just hasn’t been advancing at the speeds we require to deliver a zero-emission aircraft according to the ambitious timeline we’ve set out. This is why we began opening up inquiry into other pathways, such as hydrogen.

Q. So it’s all about hydrogen. What makes it so attractive to Airbus?

There are a number of reasons. First, hydrogen doesn’t produce any CO2 emissions, if generated from renewable energy through electrolysis. This would essentially allow aviation to be powered by renewable energy. In addition, hydrogen may enable us to significantly reduce or even eliminate NOx and contrails. Second, as the energy sector continues its transition towards clean energy sources, we expect the cost of hydrogen to significantly decline over the next decade as its production ramps up at a large scale. This will make it increasingly cost-competitive with existing options, such as jet fuel. Finally, we won’t be satisfied with simply putting a hydrogen-powered aircraft into the air: we’re targeting wide-scale adoption and that starts with putting in place hydrogen infrastructure worldwide. We believe airports should already start using hydrogen to decarbonise their ground transportation ecosystem, thereby enabling hydrogen to scale up at airports in preparation for future hydrogen aircraft by the mid-2030s.

Q. Which hydrogen technologies is Airbus currently exploring for aircraft?

Hydrogen fuel cells, hydrogen combustion in modified gas-turbine engines, and synthetic fuels are some of the technologies we’re exploring. The aircraft’s gas-turbine engine could also be hybrid in that it may be augmented by an electric motor. The aircraft could thus potentially be powered by hydrogen and a hybrid-electric system powered by fuel cells instead of batteries. These technologies are complementary, and the benefits are additive.

Q. What are some of the technical challenges of hydrogen aircraft?

There’s still the public misconception that hydrogen isn’t safe. What many people aren’t aware of are the extensive safety precautions that are considered in the design and operation of today’s kerosene-powered aircraft. Due to the rigorous application of these precautions, aviation has an impressive safety record. For this reason, industry safety targets will remain unchanged, but the technologies we use to achieve or exceed them will be different compared to the current generation of aircraft. It’s an area in which there will be zero compromises, so we’ll focus a lot of our attention on analysis, testing and flight demonstration. Storage is also an area in which technology development and maturation are required, because hydrogen tanks are bulkier and heavier than existing jet fuel storage tanks. This means we’ll need to come up with some innovative ways to integrate them into the aircraft.

Q. Will we find you talking about a new zero-emission technology that’s better than hydrogen one year from now?

Maybe! (laughs) Things move so quickly in aircraft innovation that it’s always challenging to say with 100% certainty. But hydrogen appears to be the most promising way to significantly reduce aviation’s climate impact through both synthetic fuels and future hydrogen-powered aircraft. At Airbus, we strongly believe renewable energy needs to power future aviation. And hydrogen is potentially the best pathway through which to do so. We’re also giving ourselves five years to test before we make a final decision. And personally, I haven’t been this excited about a technology’s potential in years.

There is no better place to assess the possibilities and limitations of tomorrow’s propulsion technologies than Europe’s largest facility dedicated to just that—the E-Aircraft Systems House. Here, Airbus engineers are leveraging the lessons learned from key electrification initiatives to offer world-class testing to a variety of alternative-propulsion projects across Airbus—and beyond.

The wealth of alternative-propulsion technologies currently in development is reinventing the way the transport industry approaches the design and implementation of future mobility solutions. For the aerospace industry, the challenge is to adapt and mature these leading-edge technologies, notably by increasing power, decreasing weight and reducing cost.

It is a not-so-simple task, especially as electrification and hybridisation—particularly when combined with greater autonomy and digitalisation—require novel means of interacting with and controlling the propulsion system. To get there, these systems must be simulated and tested at a facility with the equipment and amenities necessary to adequately put them through the paces.

In Europe, this facility has a name: the E-Aircraft Systems House.